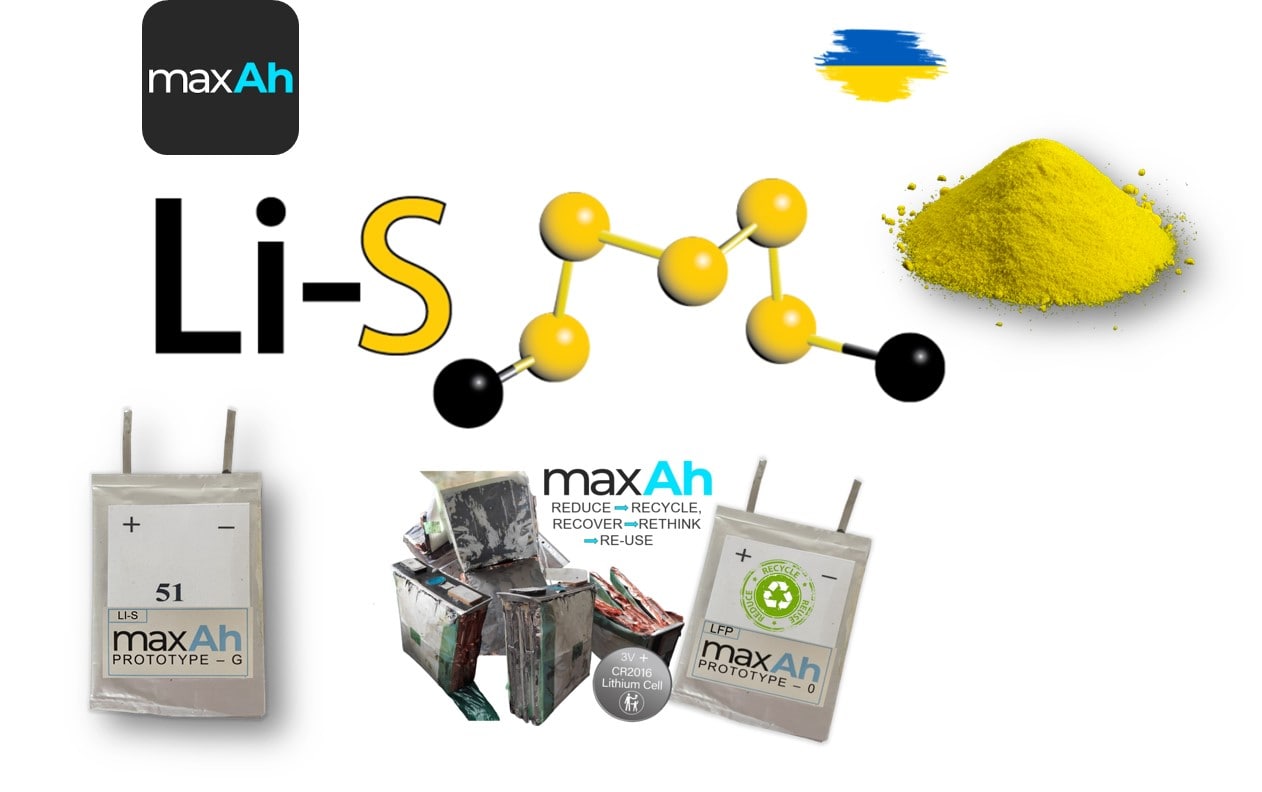 Despite the war, maxAh scientists created functional prototypes of lithium batteries modified with Ukrainian graphene and an innovative technology for restoring the cathode and anode mass of degraded LI-ion batteries, reaching a recovery level of 100%.

The most important and promising achievement is the development of a lithium-sulfur battery (Ll-S) prototype with a stable charge cycle. The battery, modified with unique Ukrainian graphene, demonstrates several times more stable cycling than when using a conventional electrolyte, which causes a rapid solution of sulfur.
The battery has three times bigger capacity, lasts three times longer, and should cost significantly less than any other lithium-ion system. The obtained results significantly bring Ukrainian technology closer to use in modern life. The development has no analogues on the world market and is presented only theoretically. The creation of a laboratory prototype is a significant breakthrough in the field of battery manufacturing.

SERGII DUBINEVYCH, maxAh CEO: “On November 2021, we announced that the prototypes would be ready in August 2022. The situation in the first months of the war slowed down our work, but did not stop it. Laboratories in Dnipro and Kyiv worked in extreme conditions. However, we achieved a result in a coordinated manner, persistently, without external investments, by our own efforts, supporting each other, staying in our places. Today, we present our achievements and will continue to work on innovative technologies that will help make battery power sources more efficient, safe, and affordable.”

Experiments during which manganese compounds were modified with Ukrainian graphene helped to confirm the results and move to a more promising (lithium-sulfur) technology. MaxAh’s lithium-ion battery prototype using manganese oxide (LMO) demonstrates a two-times faster time to full capacity recovery and a five-times longer life cycle. In addition, the probability of overheating is 500% lower than most existing analogues in the consumer electronics battery market.

Simultaneously maxAh conducts scientific work in the field of restoring an old batteries. The technology is tested on lithium-iron-phosphate (LFP) batteries, the use of which is most widespread in modern transport, everyday life, and other branches of world industry. Research has confirmed the possibility of restoring the battery to 100% capacity without graphene, as well as further strengthening its basic characteristics and extending its life cycle by modifying it with graphene.

Sergii Dubinevych also noted that maxAh is a project that is already concerned about sustainable development and solves the issue of reducing the carbon footprint on the planet: “The demand for rechargeable current sources is growing incredibly fast. Every day, a huge number of electric cars, consumer electronics, solar panels, drones, etc. appear on the world market. Safe disposal, unfortunately, is not a perfect solution. Restoring the cathode and anode mass of degraded batteries and improving their basic performance is only the first stage of our work. We are developing a solution that will help restore all, battery current sources that exist. The impact on the environment and the amount of excess carbon that enters the atmosphere during the entire battery manufacturing cycle will decrease many times. By the way, the maxAh team won the national final of Climate Launchpad 2022 and entered the global final of the competition. This achievement gets us at the forefront of global startups that offer solutions aimed at sustainable development and climate protection.” —MaxAh, CEO, added.

The company has already opened an additional round of investment for the purpose of creating a modern laboratory that will allow the company to improve the created prototypes, scale the developments, and speed up their commercialization.

Our goal is to use Ukrainian technology in at least one of the gadgets that people use in modern life every day.